Singer-songwriter TIM GRIMM releases his new digital single DREAMING OF KING LEAR on April 30, 2021. It is the last song that Tim wrote for his upcoming album GONE and the follow-up of last year’s critically acclaimed single GONE, the most played song on Folk Radio USA in 2020.

Tim Grimm explains Dreaming of King Lear: 2020 saw the loss of not only John Prine (referenced in the new album’s title track ‘Gone’) but also Eric Taylor,  Michael Smith and David Olney. These three master songwriters were all inspirations for me, and over the years I hosted them in concerts in Indiana, appeared on stages and festivals with them, and co-toured parts of the states or Europe. These are voices and spirits that were unique and will be sorely missed in the folk music world.

CLICK HERE and listen to DREAMING OF KING LEAR

Those of you that follow you have mountains still to climb

And the path we walk is lonelier but easier this time

I put this pen to paper, my hands on this guitar

Then I shared the stage with greatness, I’ll be grateful evermore

All of you were preachers and prophets without fear

Your talismans were bottles, books and dreaming of King Lear

TIM GRIMM is a southern Indiana-based folk-Americana singer-songwriter who has recorded a number of albums and songs that have reached the top of the USA Folk Radio and EuroAmericana charts.

Besides having released a dozen albums over the past 20 years, Grimm has worked as an actor in film, theater and television.

Unfortunately Tim Grimm was forced to cancel his 2020 and 2021 European & UK tours due to the Covid-19 pandemic. He plans to return to UK and Europe in April and May 2022. For bookings please contact: bert@cavalier-musicmanagement.com

Tim Grimm’s new album Gone will be released in Europe on September 10, 2021. It’s the first set of newly written Tim Grimm songs since 2017’s critically acclaimed A Stranger In This Time; the album that included the protest song Gonna Be Great 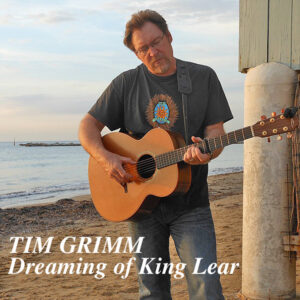