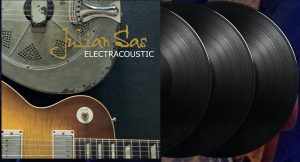 After almost two years of enforced silence Julian Sas and his band are about to start a new phase in their successful career. Full of energy with a new tour and new album. Determined to fully live up to their reputation of being one of Europe’s best live acts.

The enforced period of silence was an emotional one for Julian and his comrades. Not only because of the pandemic but also because of the sad loss of their friend and fellow musician Fotis Anagnostou. Emotions that became Sas’s inspiration for the songs on his new album ‘Electracoustic’. An unusual title for an unusual album because the record will include 2 sets of 12 new songs; an electric / full band set and a set with acoustic versions of the same songs.