Kees Prins, Paul de Munnik and JP den Tex – once ‘on the road’ together with the theater show ‘Op Weg Naar Huis’ (2007) – have translated 20 iconic American pop songs into Dutch.  Songs by Bob Dylan, Joni Mitchell, Lou Reed, Tom Waits, Robbie Robertson and Neil Young. In ‘De Vertalingen’ they reveal the hidden story behind each song. And talk about the search for the right words… That is why the performance is – last but not least – an ode to the Dutch language. Eleven of these songs will be available on vinyl (transparent) LP (limited edition). De CD edition of ‘De Vertalingen’ includes an extra track, so twelve songs. 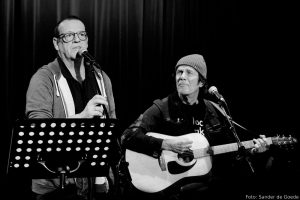 From February 24, 2022, Prins, de Munnik & Den Tex will tour the Dutch theaters with ‘De Vertalingen’ And from February 18, 2022, you’ll be able to enjoy the best songs from at home on CD or limited edition vinyl LP or digitally

The album ‘Prins, De Munnik & Den Tex – De Vertalingen’ was recorded on the island of Vlieland (NL)  in early October 2021 – live, but without an audience – The album is produced by Frans Hagenaars.

And of course the album is available from all good music stores and from the webshop on this website.