2022 will see JP Den Tex return to the Dutch theatres for a series ( 38 at the moment of writing) shows with pals Kees Prins and Paul de Munnik. JP, Kees and Paul perform in these shows 20 iconic American popsongs (by Bob Dylan, Joni Mitchell, Lou Reed, Tom Waits, Robbie Robertson and Neil Young) in Dutch and reveal the hidden stories behind these songs. A selection, 12 songs on the CD and 11 on the Limited Edition LP (transparent vinyl) will be included on the album ‘De Vertalingen’ (The Translations). Release of the CD and LP ‘De Vertalingen’ will be February 19, 2022. Obviously both will be also available from our webshop.

JP DEN TEX (from Amsterdam, Holland) is a renowned singer/songwriter, mixing up Rock and Americana with European influences such as French chanson. In the past some pundits have dubbed his music “Beatnik Americana”, referring to JP’s nomadic, quirky brand of Americana.

JP’s first notable musical adventure was in the mid 70’s as a member of Tortilla, a legendary Dutch band whose music would now be described as alt.country. Later, in the 80’s, Den Tex recorded some critically acclaimed pop albums. In 1998 he went back to his rootsy origins, accompanied by a sensational new backing band: “Emotional Nomads”. “Painstakingly honest, that’s how I’d like to be” JP wrote in the CD booklet. The album was followed by the mysterious “Hotel Yankee Tango”(2000).

After the turn of the century JP began focusing on storytelling. On the serial concept albums “Bad French” (2007) and “American Tune” (2009) his vivid imagination took the listener to the US: a European non-fiction writer sets out on a low-budget fact-finding trip from New York City to San Francisco, to gather information for his new book (“The American Dream – Does It Still Exist?”). Somewhere along the dented road he picks up disheveled Russian Elena, a former escort girl who dreams of starting a new life in California. The romantic story was later adapted for the stage and resulted in the successful theatre show “American Tune” (2009-2010).

It was followed by “Speak Diary”, another concept album and theatre show, in which JP explored ‘his first 40 years’. At long last he takes a dive into his collection of old demos: he decides to rerecord some of them, in order to get connected to days gone by. And it works! During the sessions he finds a way to make peace with his neglected past.

And then – after 6 long years and only an intimate (live) album “Storyteller” (2013) – there is another concept album: it’s all about the forgotten folk music of the fifties and sixties. “Wolf!” involves the story of Gustav Wolfowitz (a successful, 57 year old, German-born music producer) who is confronted with the sudden loss of wealth and power, due to bad investment advice. In what can easily be considered a belated midlife crisis, he also loses his – already unfaithful – partner Gina. Gustav ends up on the street, strumming one of the few possessions he didn’t have to do away with: his fav country and western guitar. After meeting two talented young musicians – a violinist (“Boris”) and a woman guitar player (“Mary Ann”) – he asks them to join his new, retro-folk group (“Blue Bandana”).

The album is strictly acoustic: vintage guitars, mandolin, ganjo and dobro (all played by the gifted Yvonne Ebbers) and a great violin (played by Diederik van Wassenaer**).

Listen here to the first 3 songs on the album “Wolf”

‘Wolf!’ is an album that when it’s good is truly good (Americana-uk.com)

You can order JP Den Tex CD’s  from our online shop. 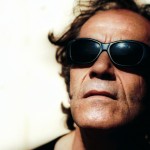 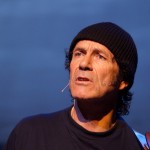 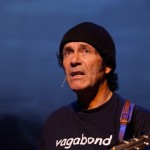