BEN BEDFORD’s new album is called Portraits. It includes the best songs from his critically acclaimed first 3 albums Lincoln’s Man, Land of the Shadows and What We Lost.

This is a specially curated retrospective collection of songs from my first three albums: Lincoln’s Man, Land of the Shadows, What We Lost. It spans material written between 2005 and 2012. I’m calling this collection simply, Portraits, as each of these tracks is, in one way or the other, a kind of portrait. Some are people. Some are places. Some are events. Some are memories. Much as William Least Heat-Moon* imbues his writing with a sense of landscape and time, I have attempted to do something similar with these songs, crafting vignettes that engage the senses. With a small dose of the suspension of disbelief, I want to take you on a journey. With each of these songs, these portraits. In short, I hope you can feel the very breeze through your hair.

I hope this retrospective proves to be an enjoyable introduction fot the uninitiate, as well as a satisfying listening experience for the long-time fan.

See you out there!

Ben Bedford’s name may not be familiar to too many record buyers on this side of the Atlantic but his captivating musical narratives certainly repay closer investigation, and “Portraits” provides an ideal introduction to the Illinois born singer-songwriter’s richly rewarding sound. The contents of this specially curated retrospective draw on material from Bedford’s first three albums,”Lincoln’s Man,” “Land of the Shadows” and “What We Lost,” which were recorded between 2007 and 2012 but never officially released in Europe. His expressive vocals and exquisite guitar work underpin a series of thought provoking character studies which rank amongst the finest examples of understated Americana that you’ll be likely to hear in this or any other year. (Kevin Bryan -Messenger Newspapers and approx. 90 other regional UK newspapers)

There are touches of Gordon Lightfoot or Townes Van Zandt in these songs, but John Steinbeck is surely the greater touchstone. Bedford is a boon of a storyteller, a true heir to the classic US folk singers (AmericanaUK / Mark Johnson – 8 /10

Ben Bedford’s voice is warmly expressive, emotive and personably believable, with a resonance to his guitar playing that evokes thoughts of Bruce Cockburn. He’s a gifted storyteller of vivid and engaging tales ( from Roots in August by David Pearson)

….marks Ben Bedford as an intelligent and tasteful singer/songwriter whose sense of writing is that of a person deeply rooted not only in history but in the resonances that those stories still have today. These are portraits that will linger for some time. (from Lonesomehighway.com by Stephen Rapid)

Ben Bedford picks a mean guitar, writes good, workmanlike songs with excellent lyrics, and is possessed of a very agreeable, John-Denver-like voice. His lyrics have inspired at least one reviewer to propose him as the Poet Laureate of Illinois, and I’d have to say he’d deserve the nomination (from Fatea  Records Magazine by Bob Leslie)

…this is a perfect introduction to newcomers just discovering his brilliance. (Folking.com / Mike Davies)

With his warm voice, thoughtful lyrics and superb guitar work, Ben Bedford creates poetry rooted in American life and history. This retrospective is an excellent introduction for the uninitiated, as well as a satisfying experience for the long-time fan. (New Classics / John Pitt)

Much like the works of writers such as Lee, Steinbeck, and Twain, Bedford’s songs capture the mythic allure of the American West in gritty detail. Using immersive and detailed imagery, his songs perfectly capture an era and people in transition. If you want to hear a master songwriter at work, then this retrospective collection of Bedford’s work is a highly recommended introduction to this amiable and talented musician. (Folkandtumble.com / Gerry McNally)

In summary, Ben Bedford is currently too far under the musical radar but ‘Portraits’ is a carefully chosen compilation that offers an ideal opportunity to discover his hidden treasures. (Spiralearth.co.uk / Steve Henderson)

Ben Bedford comes from a long line of troubadours in the folk tradition, exploring eternal themes through old stories and new stories, and creating moving and thought-provoking songs linking the present with the past. This curated selection of songs from around ten years ago feels more relevant than ever in 2020. (Musicriot.co.uk)

It’s PORTRAITS all round from album cover to each of the potential masterpieces waiting to be gazed upon. (threechordsandthetruthuk)

..the songs have a sense of place and time and evoke the true spirit of Americana.(Nothernskyreviews.com / Alan Allan Wilkinson – 4 out of 5 stars 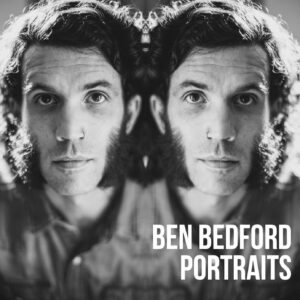 Since Ben Bedford released his album, Lincoln’s Man, to the unsuspecting folk music world, acclamation came fast, friendly and fortunately. On the strength of radio airplay, each of his first three records have scored extremely well on folk-based, singer-songwriter, roots-related charts, including the Folk DJ and Roots Rock listings in the U.S. and the Euro-American charts in Europe.

Ben Bedford delivers intriguing sketches of America, its individuals, their victories and their struggles. Poignant, but never sentimental, Bedford’s portrait-like songs capture the vitality of his characters and draw the listener deep into the narratives.

Ben Bedford has proven himself to be a truly inspired and talented storyteller…according to Arthur Wood (Maverick Magazine).

Ben Bedford has established himself as a songwriter in the tradition of musical icons ranging from Bill Morrissey to Woody Guthrie, casting individual people in the theatre of the American landscape. A true son of the heartland, Bedford dips into the deep inkwell of classic American literature and writes with the ‘old soul’ quality of his literary idols, such as John Steinbeck and Toni Morrison. All of Bedford’s albums have charted highly on the Euro Americana charts and the Folk-DJ charts.

Rich Warren, a longtime folk DJ in Chicago and perennial force in the folk world, named Ben one of the “50 most significant Folk singer-songwriters of the past 50 years”. That list also includeds Bob Dylan, Townes Van Zandt, Anais Mitchell, Joni Mitchell, Gordon Lightfoot, and John Prine

You can order all Ben Bedford CD’s  from our online shop.