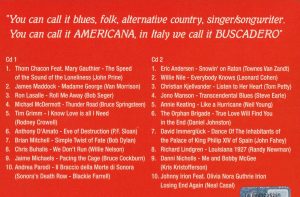 Especially imported for you and now available from our shop – Buscadero Americana –  2 CD set featuring a selection of the best singer/songwriters from America and Italy who cover songs from their colleagues and heroes and recorded these especially for this album. Performing artists include Tim Grimm, Michael McDermott, Annie Keating, Willie Nile, Eric Anderson and Mary Gauthier. They and the other artists perform songs by such luminaries as John Prine, Van Morrison, Rodney Crowell, Bob Dylan, Bruce Springsteen, Neil Young and many more. Tim Grimm sings ‘ I Know Love Is All I Need’ by Rodney Crowell and also made a nice clip of that song that you can watch here